Find more information on the largest and most well preserved wooden fish weirs known in eastern North America, in use from about 3300 B.C. until the recent past. 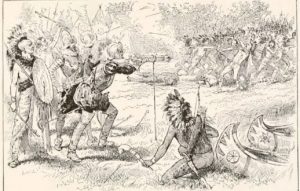 The warfare between the Iroquois and the Hurons, in which Champlain’s expedition of 1615 was only an incident, came to a sudden end in the middle of the century . In 1649, while Charles the First was being executed in England, the Iroquois determined to close in on Simcoe County with their entire force. The chief Huron towns were stormed. The inhabitants were butchered or taken captive. Three of the Jesuit Fathers, Daniel, Brebeuf and Lalement, suffered martyrdom.

The Iroquois campaigns of 1649-50 practically exterminated the Huron race. 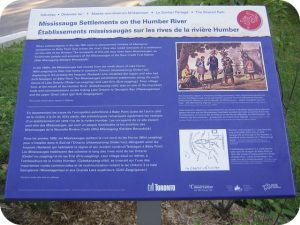 The Name “Toronto” came from “The Narrows”

The name of Toronto has a history distinct from that of the city itself. Originally, the term “Taronto” referred to a channel of water between Lake Simcoe and Lake Couchiching, but in time the name passed southward, and was eventually applied to a new fort at the mouth of the Humber River. Fort Toronto was the first settlement in the area, and lent its name to what became the city of Toronto.

“Taronto” later referred to “The Narrows”, a channel of water through which Lake Simcoe discharges into Lake Couchiching. This narrows was styled tkaronto by the Mohawk, meaning “where there are trees standing in the water”, and was recorded as early as 1615 by Samuel de Champlain. Today the area is partially surrounded by trees with marinas and includes the national historic site of the Mnjikaning Fish Weirs.

[The Fish Weirs involved vines etc. strung between stakes driven into the bottom of the Narrows. Some stakes

sprouted roots, branches and leaves, hence the description “where there are trees standing in the water” ] 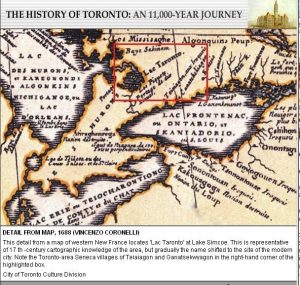 by 1686, Passage de Taronto referred to a canoe route tracking what is now the Humber River. The river became known as Rivière Taronto as the canoe route became more popular with French explorers, and by the 1720s a fort to the east of the delta on Lake Ontario was named by the French Fort Toronto. Rivière Taronto was renamed to Humber River by Simcoe.

The change of spelling from Taronto to Toronto is thought to originate on a 1695 map by Italian cartographer Vincenzo Coronelli.[1]

The story of the Taronto Passage and the Toronto Carrying Place Trail and the Fish Weirs in the Narrows between Lake Simcoe and Lake Couchiching is told in pieces at various sites. Taronto originally referred to the Narrows where trees grew in the water. The word then came to refer to the whole lake. Then it referenced the passage-portage route between Lake Ontario and Lake Simcoe and finally came to reference the city that was built at the southern end of the passage.

“The Toronto Carrying-Place Trail, also known as the Humber Portage and the Toronto Passage, was a major portage route in Ontario, Canada, linking Lake Ontario with Lake Simcoe and the northern Great Lakes. The name comes from the Mohawk term toron-ten, meaning “the place where the trees grow over the water”, an important landmark on Lake Simcoe through which the trail passed.”

“Once into Lake Simcoe, known as Ouentironk among the First Nations people living in the area, the trail continues north through straits on the north end of the lake into Lake Couchiching. These straits, an important fishing area, gives rise to the name Toronto, as this is “the place where the trees grow over the water”. The First Nations peoples had planted trees in the narrows between the lakes to act as a weir to catch fish. From there the trail follows the Severn River into Georgian Bay”

The Mnjikaning Fish Weirs are one of the oldest human developments in Canada. 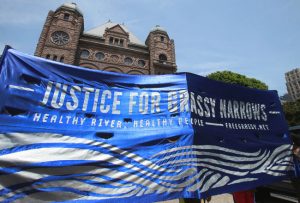 These fishing weirs were built by the first nations people well before recorded history: so far back that they actually pre-date the Great Pyramid of Cheops in Giza (erected 2560 BC) according to carbon dating done on some of the wooden remnants. The weirs were built in the narrows between Lake Couchiching and Lake Simcoe where today’s Ontario Highway 12 passes over. They were preserved by the water and layers of protective silt.

The weirs were built as fences to help encircle the various fish species that would faithfully end up within the traps. These early fishermen wove brush and vegetation among the weirs to make net-like fencing where the fish were guided to be speared, netted or kept for later use.

They were in use for 5000 years, right up until World War II. Champlain noted their existence on Sept 1, 1615, when he passed here with the Huron en route to the battle with the Iroquois on the south east side of Lake Ontario.